5 fabulous Blaze and the Monster Machines indoor activities for kids 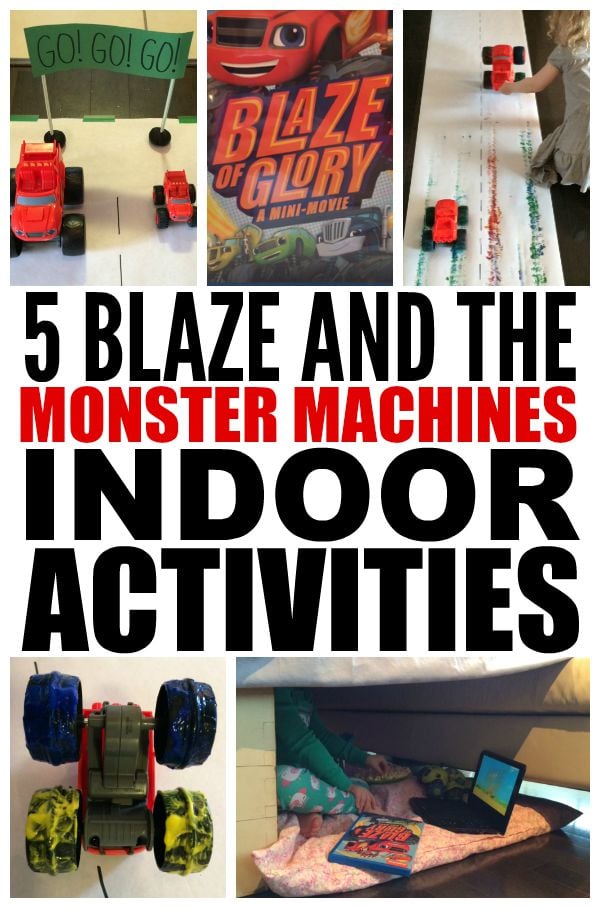 When I went to pick my daughter up at summer camp last Friday, it was POURING with rain, and while she would have been content to stand outside and jump in puddles all afternoon, I had something a little more exciting up my sleeve.

In the past, I’ve always been pretty terrible at organizing activities ahead of time, and the 2 of us often spend bad weather days trying not to climb the walls of our 1,300-square-foot condo. But with less than 2 weeks until Kindergarten starts, I’m really trying to make this summer extra fun, and decided to go all out and organize a Blaze and the Monster Machines afternoon for the 2 of us.

Are your kids Blaze fans?

My daughter didn’t really know what the show was about up until a couple of weeks ago, but when Nickelodeon sent us an AMAZING stash of toys to review, Blaze became her new best friend. Actually, that’s not true. Zeg is her new best friend, but Blaze is a close second.

There were so many toys in the box of goods we received from Nickelodeon that we didn’t know where to start, but after testing them all out while simultaneously watching the show (and sharing an entire bag of popcorn), it was clear that my daughter was not only falling in love with the characters of Axle City, but that I was falling in love with the fact that I found a TV show that teaches her about science, technology, engineering, and math all at the same time.

And the toys are awesome!

The jet wings on the TRANSFORMING BLAZE JET automatically pop out and transform him from a monster machine to a high-flying hero, and as my daughter flies him around our condo, he speaks to her in flight-related phrases. And once his wheels are back on the floor, he transforms back into a monster machine with sounds and phrases to match. This is a great toy for teaching the STEM concept of thrust, which is the power the engine of the Transforming Blaze Jet makes to push the plane through the air! The TALKING BLAZE toy has been a real hit with my daughter as it has allowed her to recreate a lot of the scenes from the Blaze and the Monster Machines show. The sounds and phrases he makes are fabulous, and this is a great toy for teaching the STEM concept of sound waves. I’ve explained to my daughter that when Blaze talks, his words turn into sound waves that move through the air to her ears. I thought the concept would be a bit advanced for her, but she’s started talking about sound waves in relation to all of her toys that speak (we own a lot…), and it’s been a fun lesson to teach her! I’ve had a lot of fun racing the SLAM AND GO BLAZE AND CRUSHER toys with my daughter in the last week or so. These toys have been great for teaching the STEM concept of acceleration, which is what happens when Blaze is going one speed and then suddenly starts to go faster. The 2 of us go particularly CRAZY when Blaze accelerates and beats Crusher!! This BLAZE DIE-CAST CAR has been EVERYWHERE with us over the last 7+ days. He fits perfectly in my purse so we can recreate the races and stunts from the show when we’re on the go, and since our friends at Nickelodeon were kind enough to send us TWO of these awesome cars, we often build ramps and obstacle courses around our condo so we can race them together! My daughter sleeps with 20 plush toys in her toddler bed each night, and her new and adorable ZEG PLUSH is now her favorite, and after watching the BLAZE OF GLORY MINI-MOVIE, we immediately downloaded season 1 to our iPad, and she watches it every morning while eating her blueberry waffles!

Playing with all of these toys was great. We were able to recreate so many different scenes and stunts from the show, and we learned about different STEM concepts, like thrust, sound waves, and acceleration. But you and I both know that when it’s raining outside, toys on their own are never enough to keep kids occupied, so when the weatherman confirmed the rain was not going to let up before bedtime last Friday, I decided to put together these Blaze and the Monster Machines indoor activities for kids and we had SO. MUCH. FUN.

And since I know I’m not the only mom who struggles to keep her kids entertained on bad weather days, I decided to share them with all of you. If you’ve never drawn with toy cars, you’re missing out. All you need is a huge roll of paper, some magic markers (I suggest using washable markers!), tape, and a bunch of toy cars of different sizes. Simply tape the markers to the back bumper of each car, and let your kids go crazy! We used the Slam and Go Crusher, Talking Blaze, and die-cast cars, and had a blast. As you can see, the die-cast car produced beautiful, straight lines, but my daughter particularly loved drawing with the Talking Blaze toy because his voice helped her re-create her favorite scenes from the show while she was drawing. And as an added bonus, we had a huge piece of artwork afterwards, which I am saving to make teacher appreciation cards with at the end of summer camp! Once we had tired of our drawing activity, I asked my daughter if she wanted to make a Blaze road rally in our living room, and she was SO excited. You could do this so many different ways, but since I’m an overachiever, I decide to go the extra mile and make ‘START’ and ‘STOP’ signs as well as a road way out of paper. I felt this would bring the scene to life a little bit better, and the green and red signs were a great way to reinforce the concept of ‘GO’ and ‘STOP’ with my daughter. I found the Slam and Go cars were best for this activity, and my daughter had a great time watching them race to the end of our speedway. We discussed the STEM concept of acceleration A LOT during this activity! She also enjoyed running to gather the cars when they reached the finish line, and then repositioning them at the starting line, which ended up being a great way to burn off a little extra fuel! GET BLAZE THROUGH THE FINISH LINE!

While we were racing our cars, we decided to see how hard it would be to get each car through the ‘poles’ (aka ‘straws’) of our finish line.

The Talking Blaze and die-cast cars were PERFECT for this activity, and I was impressed with how many times my daughter got close to getting the cars through the finish line as it wasn’t that easy to do! When the road rally lost its appeal, things started to get a little messy. I’m not usually one for getting out paints, but with the rat-tat-tat of rain ringing in my ears, I couldn’t resist. My initial thought was to paint the front wheels one color, and the back wheels with another, and focus on how 2 colors can mix together to create another. My daughter really enjoyed comparing the different tire marks each of the toys made, and especially loved how big and chunky the Talking Blaze tire marks were, but when she asked if we could cover the tires of our own car with paint so she could get a proper look at the tire tread pattern, I eventually had to give up on the educational part of the activity and just let her have fun!! We were pretty tired after all was said and done, so after cleaning up our mess, we threw on our pajamas, made a fort, popped some popcorn, grabbed our Blaze of Glory Mini-Movie DVD and Zeg plush, and enjoyed a little Blaze camp out in our living room. As you can see from the huge smile on my daughter’s face, it was the perfect way to end a rainy afternoon! We had SUCH a good time playing with all of the toys Nickelodeon sent to us, and cannot wait to check out the Blaze and the Monster Machines Play Date Pack (CLICK HERE to download your free copy!) for other Blaze games, crafts, and activities!

If you’re interested in any of the toys listed in this post, they are available for purchase at all major retailers, or you can buy them now at Target.com!

What are YOUR favorite indoor activities for kids for bad weather days?

This is a sponsored post. All of the above-mentioned toys were sent to me to review by Nickelodeon, and I received special perks as part of my affiliation with them. All opinions expressed on this blog are my own. 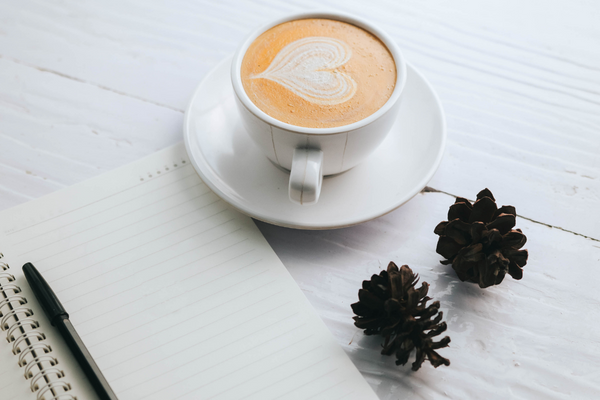 55 Journal Prompts for Self-Discovery and Self-Growth 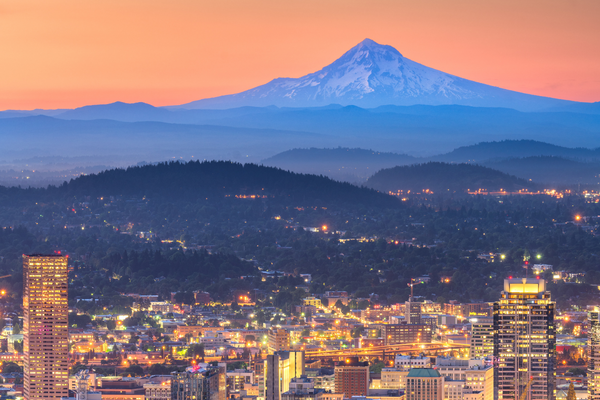 12 Things To Do with Kids in Portland 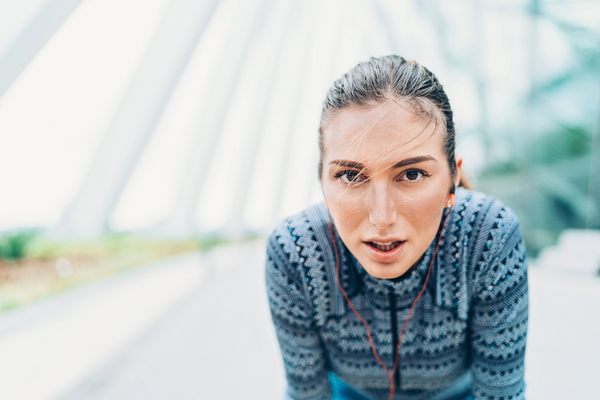 Overtraining and Your Hormones: 8 Things Women Should Know